as soon as i saw the beautifully green bunches of fresh dill at the market i knew what i wanted (or almost had) to make with them. dill-herbed rice, or shevid-polow as we call it in farsi. dill is one of my absolute favorite herbs i can never resist buying when it is in season looking all fresh and darkish green and beautiful. i love the scent it creates and leaves in my kitchen as i chop it, and the slightly different aroma that surrounds me as it steams away with the basmati rice. [talking

about scents and aromas reminds me of a side note: this post on the lovely perfume blog kafkaesque references mine on baghali polow, another dish loaded with fresh dill]. as with most my food obsessions, i first fell in love with dill in my grandmother’s kitchen in Tehran-it seems to me she was always chopping herbs-or maybe i was so often around when she did, because i loved watching (and smelling) her doing it so much. it was the way she bunched them tightly together with one hand while gracefully slicing them ever so thinly with the other. she was a true expert with the knife. and so many other things. thinking back on it, hers was not a sophisticated kitchen with many fancy gadgets-but trust me when i tell you some serious magic happened there. and boy was i lucky to be a small part of it as taster/assistant/taster/observer/taster in chief.

even though i didn’t fully realize it then, she was constantly, indirectly, and deliberately teaching me things every time i was with her.  i can hear her voice in my head: sharing, reminding, cautioning, praising, cautioning some more. one of the dishes she taught me was shevid polow layered with her favorite beans: black-eyed peas, or “cheshm bolboli” (translates to parrot eyes for obvious reasons). It is the type of absolutely delicious nourishing dish that reminds you of all good things and fills you with pure (stomach) contentment. well worth the work and the wait.

a simple dish, a small compromise, and a most beautiful october sunset over the ocean:

in preparation and anticipation of the fast approaching holiday season with all the glorious food consumption it entails (it’s bad! already can’t stop thinking about what sides and pies to serve this thanksgiving) i’ve made the decision to feed us a lighter, simpler, and predominantly vegetarian diet for the next few weeks. after a few nights of different vegetable soups and a nice salad nicoise, it was time for a non liquid meal on the warmer side. lately i’ve been trying to cook with what i have as opposed to shopping for specific recipes, so i wanted to use the beautiful light green zucchinis i had picked up at the farmers market along with a large sweet onion, tomatoes (always abundant in my kitchen), garlic, and fresh basil. the plan was to serve the dish with yogurt and flat bread, sort of in line with a persian “borani kadoo”, but i realized i had a slight problem.

we have a dear visitor staying with us, and he doesn’t  like garlic at all, nor basil, for that matter. the dish would survive without the garlic, but my basil was starting to become slightly wilted and had to be used: pesto! dinner would be a simple “borani” (a typical persian appetizer served with yogurt) with an optional drizzle of lemony walnut pesto. everyone was happy. oh, and the sunset picture? i just had to share the magical moment i snapped with my phone a few nights ago-there are few things more beautiful than the special light of an autumn sunset over the pacific!

in a heavy skillet or frying  pan, heat the oil, then add onions and allow them to caramelize (cook while stirring occasionally on med/low heat until they become light brown and glassy) before adding the zucchinis (and turmeric & garlic if using) and frying on both sides (turn carefully with kitchen thongs). season with salt and pepper. cover with tomatoes, and allow them to cook  (stirring very carefully if necessary because the zucchinis break easily- or cut zucchinis in halves before frying ) on medium/low heat for about 15-20 minutes. serve when any liquid from the tomatoes has evaporated and thickened. 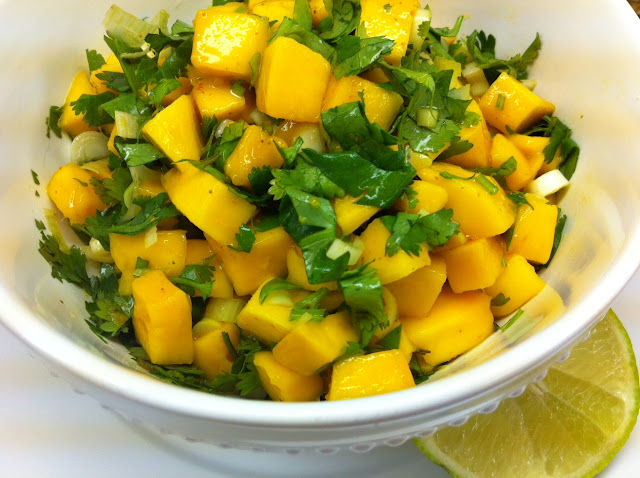 the menu for tonight seems like (and possibly is) an odd combination-chicken kuku (or omelette) with mango salsa- this is how it came about: yesterday i had (lazily) picked up a nice organic roast chicken to serve with a green salad for dinner. we ended up joining friends for pizza, and the chicken landed in the refrigerator-where i found it this morning as i grabbed the coconut milk for my morning coffee (i’m getting used to it). i contemplated making a chicken salad for dinner, but it’s a cloudy sunday, and the idea of a cold salad was not sitting well with me. as i thought about other options, i remembered how my grandma used to make chicken kuku with her leftover braised chicken. in iran lunch is often the main meal of the day, while dinners are served late (often after 8 or 9 PM) and on the lighter side. in summer months dinner might consist of sliced watermelon, flatbread, and feta cheese with fresh herbs, a slice of kuku with yogurt, or a cold cucumber yogurt soup (mast-o-khiar) flavored with dill and mint, topped with green raisins (recipe coming soon). back to my kuku dinner-i had a slight problem-i’ve never made chicken kuku before, and although it’s easy to find recipes, i wanted my grandma’s-so, i called my dad, and we think we’ve come up with the right ingredients to make a kuku like mashan used to make. where does the mango salsa come in? well, although my grandma never made a mango anything (i don’t think), i have four beautiful (very) ripe mangoes that need to be used today (no smoothies today, thank you), and i thought they might nicely compliment the kuku cut up in a sweet and sour salsa with cilantro and lime juice. we shall see, but i’m pretty hopeful. 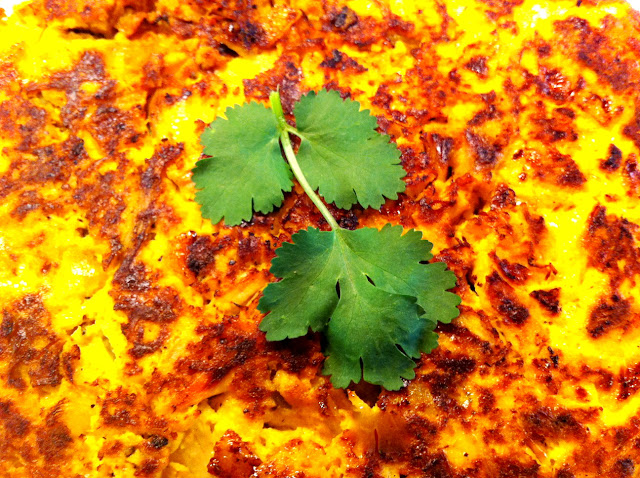 ingredients for the chicken eggplant kuku:

brown the cubed onion and eggplant in a skillet with the turmeric and about 2 tbsp oil for about 3-5 minutes until soft. remove and let cool. in a bowl combine the cut up cooked chicken, cooled onion mixture, yogurt, sea salt and pepper, saffron, eggs, baking powder, and lime juice. combine thoroughly with a spatula. pour the remaining oil in a (not too) deep frying pan, and add your mixture-be careful here with your heat-keep it on high for a few short minutes, then reduce heat to medium low, and allow the kuku to cook slowly.

after about 10 minutes cover the kuku slightly (letting the steam out) and let it cook on med/low heat for about another 10-15 minutes. at this point the kuku should have “set” and look relatively dry (not too much liquid). you can either cut in fours and flip each piece, or flip with the help of a platter then transfer back to the pot carefully to cook the other side for another 15 minutes. the kuku can also be made in a baking dish in the oven at 350 degrees, by adding some oil to the top of the kuku after about 30 minutes of cooking and then cooking it more for another 20-30 minutes until golden brown. 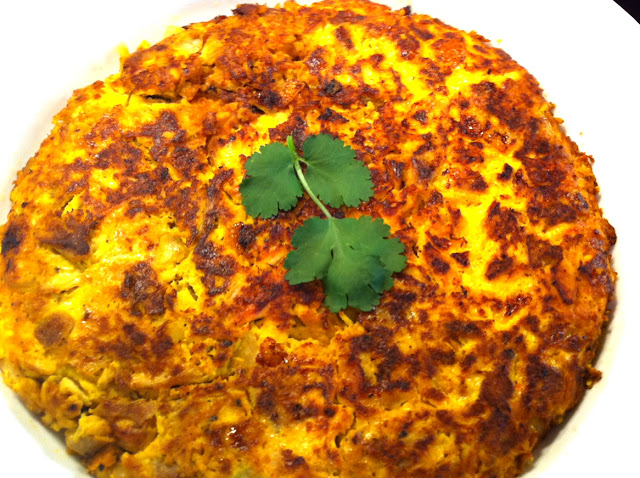 for the mango salsa:

combine well and allow the salsa to “marinate” for a good 15-20 minutes prior to serving. 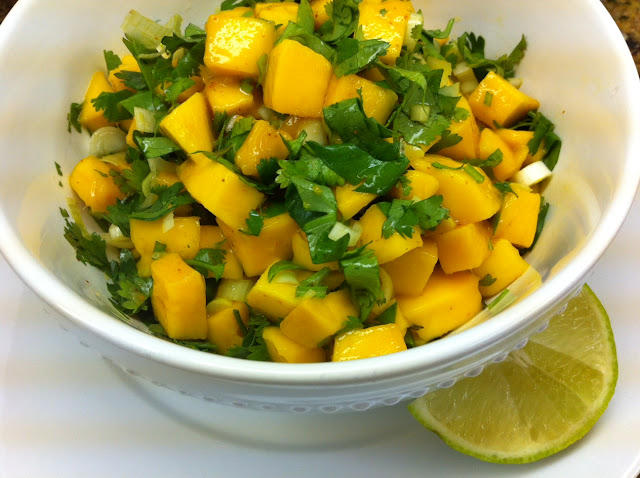