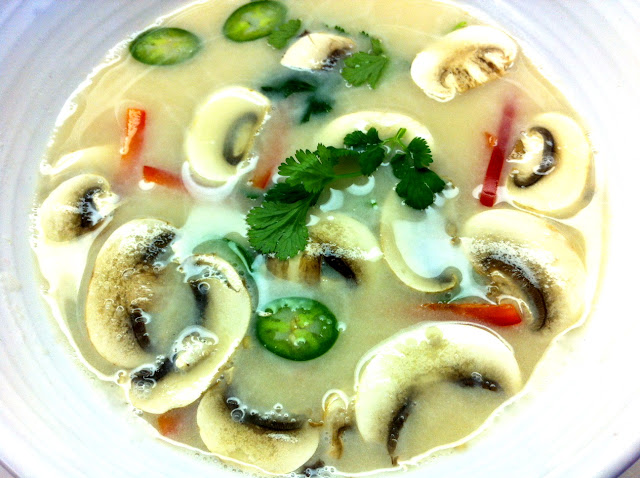 my sister and i rendezvous at our favorite thai restaurant for lunch more often than i’d like to admit. we always start with a pot of green tea and the thai coconut soup (tom kha), which we gulp down practically before we say hello (only a slight exaggeration)! this morning i got up literally thinking about the soup-which could have had something to do with the fact that it was hailing (in {sunny} san diego this is quite a rare event….ehem…) just as we were waking up. even though the storm has now passed, and i could venture out for some soup or perhaps all the ingredients to (attempt to) make it, i decide to stay put and go rummaging in my pantry and refrigerator for the ingredients. this soup has always seemed rather exotic and out of reach to me, but i’ve looked at several recipes, and have a general idea of what i need to possibly make it work at home. the good news is i usually have a pretty well stocked pantry-so i quickly grab some shallots and garlic, ginger root (instead of the recommended galangal), two cans of coconut milk (a staple in my pantry), and a couple of limes before looking in my refrigerator for the essential lemongrass (yipee! had three stalks), cilantro, kaffir lime leaves (slightly dried up-but still), thai chili peppers (nope), and fish sauce (yeessss). from what i’ve gathered, this is a rather easy soup to make if you have all (or most of) the ingredients. this is what i used to make my oh-so-deliciously-fragrant soup (success!) based on what i had available: 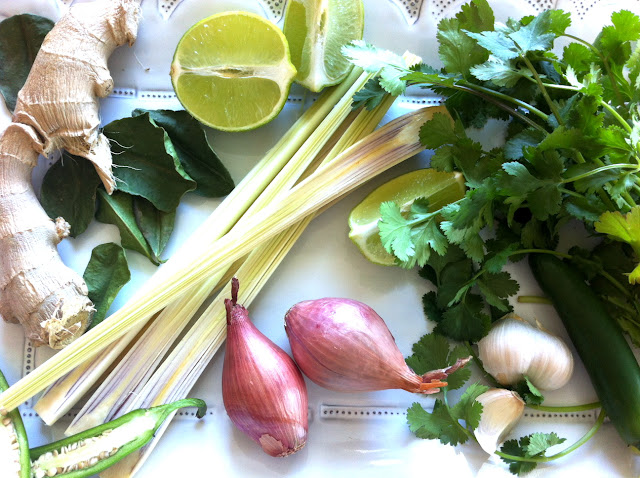 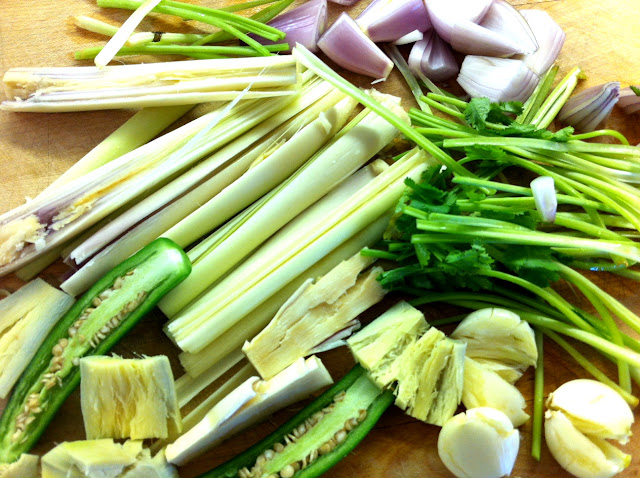 1. process the ingredients: cut the tops off the lemongrass and cut in half, then smash (crush) them a bit to release the flavors, peel and cut the shallots, peel and crush the garlic cloves, cut the peppers in half, peel and crush the ginger or galangal, crush the lime leaves, and cut the stalks off the cilantro (save the leaves for later). there is often white chicken meat or shrimp added to this soup, but i prefer mine (almost) vegetarian except for the fish sauce (which you could substitute with sea salt or tamari).
2. pour the coconut milk in your soup pot with about 1/2-1 cup water (or you can add chicken broth), then add the lemongrass, shallots, garlic, peppers, ginger or galangal, kaffir lime leaves, cilantro stalks, fish sauce, and cane sugar. bring to a boil, reduce the heat to medium low, and simmer for about 15 to 20 minutes with the lid on (partially).
3. pour the soup through a mesh sieve, then add the resulting broth back to the pot with the mushrooms, red bell peppers, and lemon juice (juice of 2-3 limes). heat the soup back up (for just a minute or two) and remove just before boiling.
4. serve with a lime wedge, a few thin slices of chili pepper (spicy), and lots of fresh cilantro leaves. can you feel your sinuses clearing up as we speak?
(Visited 28 times, 1 visits today)

it’s so hard to believe the holidays are over, and as much as i enjoy the {oh so wonderful} break from routine, it often takes quite a toll on our diets and waistlines (but oh how good it was while it lasted). it took me a few reluctant days in the new year (happyhappy new year!) to realize (or accept) it was time to make changes to the way were eating. time to get back to eating more real, unprocessed, lighter, let’s just call it “g r e e n” foods. yes, that meant back to green smoothies, other smoothies, kale in (almost) everything, lettuce wraps, quinoaquinoaquinoa, salads, salads, and more salads, hello, arugula! hard boiled eggs, and endless amounts of tuna salad! but a family has to eat a nice warm meal once in a while (especially the ones who behaved over the holidays). that’s why this light and green (seriously delicious) curry sauce/paste came about to accompany the simple chicken tenders and vegetables planned for dinner. some of us enjoyed the resulting warm, satisfying, comfort-giving curry with a side of jasmine rice while others (me) had a few spoonfuls of fluffy steamed quinoa instead (not bad at all after a day of just greens). this versatile sauce can be used with any meat, fish, or vegetables to create a “curry” that will always satisfy beyond imagination. add a few kefir lime leaves to the pot while simmering to take it to another level. the smell that surrounds you while it cooks? as delicious as every bite. noosh-e-jan!

blend together until smooth:

sauté the meat/vegetables of choice on high for about 7-10 minutes in 1 tbs virgin unfiltered coconut oil, then add the green sauce and 5-8 kefir lime leaves. bring to a soft boil, reduce heat and simmer for about 30-40 minutes. for best results sauté (fry) the sauce separately in 1-2 tsp coconut oil for about 5 minutes on high heat while stirring before adding to meats/vegetables. sprinkle with fresh cilantro prior to serving with jasmine rice or steamed quinoa.

there’s nothing like a good bowl of delicious piping hot {home made} soup to make you feel  like you’re right where you’re supposed to be. it warms you as it fills you up, rounds out the edges, and makes you feel balanced somehow. content. at home. or is it just me? i miss my grandma more and more each day. i yearn for her voice, her gentle touch, her quiet presence, and her warm embrace. it’s impossible for me to make a pot of soup or stew (or food of any kind, really), without feeling her warm presence around me. guiding me. making me feel  safe and whole. at home. that’s what it is-the connection i feel with soup{making}…it’s that kind of food. one of the main reasons why i make it as often as i do. The other (rather important) reason is  that i’m trying, yet again, to cut out the processed grains and things i’m told (repeatedly) do not like me or my joints as much as i seem to enjoy them. soooo, moving reluctantly towards more vegetable based soups, proteins, salads, and less grains: rice, wheat, {flour} pasta, sugar. waaaahhhhhhh! do i have to?  yesidoyesidoyesido. if this butternut squash soup is any indication, things will be just fine-it was deeeeeliciouuuussss: slightly sweet, satisfyingly creamy, and perfectly rounded with  the touch of nutmeg and coconut cream. smiling wide as i remember something important-we have leftovers!

chicken curry is one of those go-to meals i {go to} when i’ve run out of ideas for quick and easy meals involving chicken. i have no fixed recipe and make no exact measurements, so it all depends on what’s available, my mood, and how much time i’m willing to spend on preparing the meal. after taking inventory of possible ingredients, i make a quick “paste” in the blender before simmering the (sauteed) chicken and vegetables in it for about 30-45 minutes. sometimes the resulting curry comes out so spicy it is almost difficult to eat (not really), but often times it is surprisingly well balanced and delicious despite the rather casual process involved in making it happen. more often than not we are perfectly satisfied and happyhappy after polishing off the steaming bowl of curry topped with loads of chopped cilantro and a side of fluffy basmati rice (or steamed quinoa if i’m being good). i’m pretty sure if (when) you make this curry and taste the results you’ll be {going to it} as often as i do.

2. in a dutch oven or skillet sautee chicken and onions in 1 tbs coconut oil. remove from pot, then heat the remaining coconut oil and add the paste to the hot oil. allow the sauce  to cook and start to thicken slightly (bubbles a bit) while stirring. add the chicken and onions back to the pot with the heated paste, along with the potatoes, lime leaves, and about 1-2 cups water. bring to a boil, reduce heat, and simmer until chicken and potatoes are fully cooked. make sure to adjust water if necessary.

3. about 15-20 minutes before serving add remaining coconut milk and peas, stir carefully. serve with fresh chopped cilantro on top (or drizzled with this green sauce) and steamed rice on the side. s-p-i-c-y, right?