i’ve been asked by several people to make koofteh {کوفته} or persian rice meatballs since i started food blogging. koofteh comes from “kuftan-کوفتن” which means  (“to beat, grind, break”). when i think about it, i clearly remember my grandma mixing the ingredients in her big bowl, carefully twisting and turning her hands around to bring all the ingredients together in to a paste like texture-and mostly i remember the strong appetizing smell of savory drifting around as she did this. when i came across some fresh summer savory {marzeh} at the market yesterday, i took it as a sign that it was time for me to make some of these delicious meatballs. i have made them before, but it’s been a while, and i’ve typically asked my mom (who makes the most delicious ones ever) to make my koofteh for dinner parties. so i call her for the recipe after i begin to cook this morning-which means i had already started boiling the rice and split peas before she tells me to skip them (split peas) altogether and substitute chick pea flour– which i was out of- – -next time. mom explains the process to me in great detail and with such passion that my mouth starts watering- and then, just before we hang up she says: “don’t forget the saffron!”-to which i say “of course not”, although frankly, i probably would have-saffron makes (almost) all persian dishes taste that much better. i go to work (and it is some work to prepare these), and the resulting koofteh’s make the house smell heavenly, then disappear far too quickly off the platter. next time i’ll have to try the chick pea flour-even though my meatballs were good, mom’s are by far better! 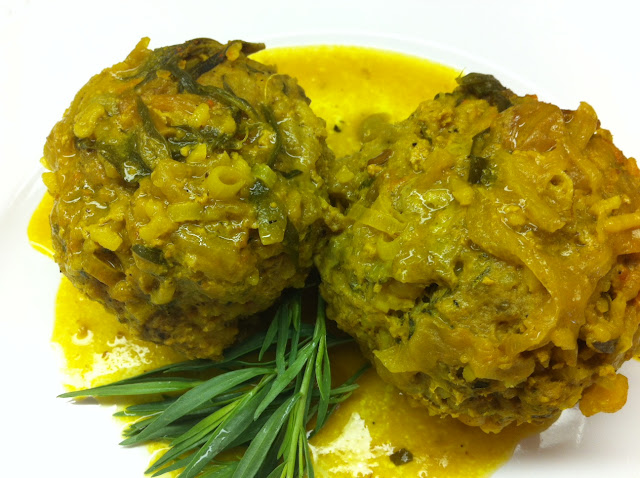 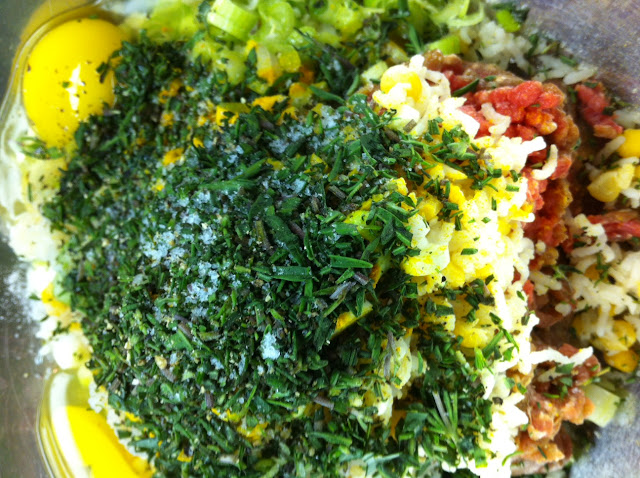 1. combine beef, cooked rice, split peas (or preferably chick pea flour) salt & pepper, chopped herbs, green onions, 1 tbs turmeric, and eggs in a deep bowl-mix really well, pressing down on the mixture as you combine and almost “beat” it for a few minutes.
2. start making the meat balls (something between a golf ball and a tennis ball-your choice-it’s best just under a tennis ball size) by rolling portions of the mixture between your hands.
3. make a hole in the middle of the meatballs with your finger and insert some fried onion (piaz dagh), a dash of cinnamon, and even optionally some chopped walnuts or chopped cooked eggs. close up the hole and roll again in to a nice tight ball.

4. when you have all the meat balls ready, add about 1.5-2 cups of water to a pot (not too deep), about 2 tbs fried onions, 1 tbs turmeric, sea salt, pepper, a few sprigs of the herbs, and the sour grapes.
5. bring to a boil, then carefully place the meat balls in the pan and let them simmer for five minutes on one side, then turn, sprinkle or drizzle with the saffron, partially cover with a lid and let simmer on low for 45 minutes to an hour. 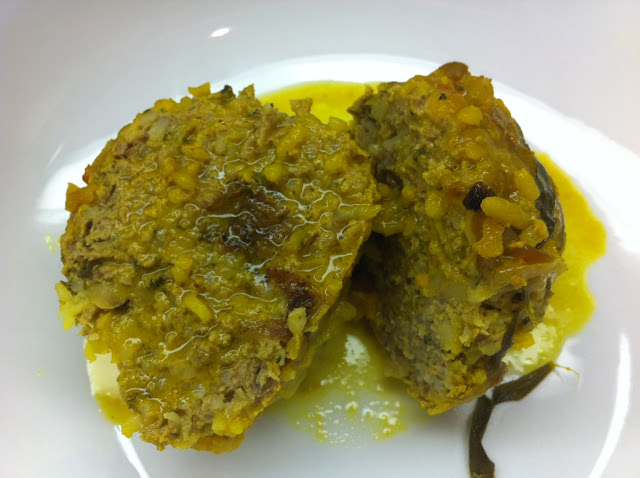